Some remedies for removing acne

Some remedies for removing acne

Acne is one of the most common skin conditions in the world, affecting an estimated 85% of people at some point in their lives.

Conventional acne treatments can be expensive and often undesirable side effects like dryness, redness and irritation.

This has prompted many people to look into how to cure acne naturally at home. The internet is filled with suggestions but so natural treatments actually work?

First of all the question arises that what causes acne.Acne starts when the pores in your skin get clogged  with oil and dead skin cells.

Each pore is connected to a sebaceous gland, which produces an oily substance called sebum.

Extra sebum can plug up pores, causing the growth of a bacteria known as propionibacterium acnes.
Your white blood cells attack P. acnes, leading to skin inflammation and acne. Some cases of acne are more severe than others, but common symptoms include whiteheads, blackheads and pimples. 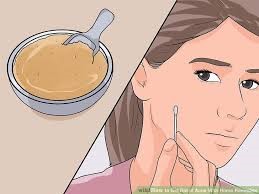 Many factors contribute to the development of acne, including genetics, diet, stress, hormone changes and infections.
Below are 13 home remedies for acne that you might want to try.
# Apple cider vinegar is made by fermenting apple cider, or the unfiltered juice from pressed apples.
Like other vinegars, it is known for its ability to fight many types of bacteria and viruses Apple cider vinegar contains several organic acids that have been shown to kill P. acnes In particular, succinic acid has been shown to suppress inflammation caused by P. acnes, which may prevent scarring
Also, lactic acid has been shown to improve the appearance of acne scars What's more, apple cider vinegar may help dry up the excess oil that causes acne in the first place.
1.    Mix 1 part apple cider vinegar and 3 parts water (use more water for sensitive skin).
2.    After cleansing, gently apply the mixture to the skin using a cotton ball.
3.    Let sit for 5–20 seconds, rinse with water and pat dry.
4.    Repeat this process 1–2 times per day, as needed.
It is important to note that applying apple cider vinegar to your skin can cause burns and irritation, so it should always be used in small amounts and diluted with water. 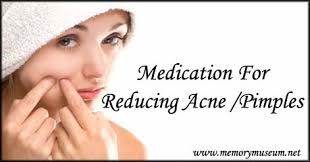 The organic acids in apple cider vinegar may help kill acne-causing bacteria and reduce the appearance of scars. Applying it to the skin may cause burns or irritation, so it should be used carefully.
# Zinc is an essential nutrient that's important for cell growth, hormone production, metabolism and immune function.
It is also one of the most studied natural treatments for acne. Research shows that people with acne tend to have lower levels of zinc in their blood than those with clear skin
Several studies have shown that taking zinc orally helps reduce acne.
In one study, 48 acne patients were given oral zinc supplements three times per day. After eight weeks, 38 patients experienced an 80–100% reduction in acne
The optimal dosage of zinc for acne has not been established, but several studies have shown a significant reduction of acne using 30–45 mg of elemental zinc per day.
Elemental zinc refers to the amount of zinc that's present in the compound. Zinc is available in many forms, and each one contains a different amount of elemental zinc.
Zinc oxide contains the highest amount of elemental zinc at 80%.
The recommended safe upper limit of zinc is 40 mg per day, so it is probably best to not exceed that amount unless under the supervision of a medical doctor. Taking too much zinc may cause adverse effects, including stomach pain and gut irritation.
It is also important to note that applying zinc to the skin has not been shown to be effective. This may be because zinc is not effectively absorbed through the skin.
Individuals with acne tend to have lower zinc levels than people with clear skin. Several studies show that taking zinc orally can significantly reduce acne.
# Both honey and cinnamon  are excellent sources of antioxidants
Studies have found applying antioxidants to the skin is more effective at reducing acne than benzoyl peroxide and retinoids .
These are two common acne medications for the skin that have antibacterial properties.
The antioxidants studied were vitamin B3, linoleic (omega-6) fatty acid and sodium ascorbyl phosphate (SAP), which is a vitamin C derivative.
These specific antioxidants are not found in honey or cinnamon, but there is a possibility that other antioxidants may have a similar effect.
Honey and cinnamon also have the ability to fight bacteria and reduce inflammation, which are two factors that trigger acne.While the anti-inflammatory, antioxidant and antibacterial properties of honey and cinnamon may benefit acne-prone skin, no studies exist on their ability to treat acne.
1.    Mix 2 tablespoons honey and 1 teaspoon cinnamon together to form a paste.
2.    After cleansing, apply the mask to your face and leave it on for 10–15 minutes.
3.    Rinse the mask off completely and pat your face dry.
Honey and cinnamon have anti-inflammatory, antioxidant and antibacterial properties. Because of this, they may be beneficial for acne-prone skin. 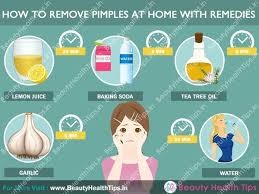 # Tea tree oil is an essential oil that is extracted from the leaves of Melaleuca alternifolia, a small tree native to Australia.
It is well known for its ability to fight bacteria and reduce skin inflammation
What's more, several studies show that applying 5% tea tree oil to the skin effectively reduces acne
When compared to 5% benzoyl peroxide, 5% tea tree oil did not act as quickly, but it did significantly improve acne after three months of use
It also resulted in fewer adverse effects like dryness, irritation and burning, compared to benzoyl peroxide.
Tea tree oil is very potent, so always dilute it before applying it to your skin.
1.    Mix 1 part tea tree oil with 9 parts water.
2.    Dip a cotton swab into the mixture and apply it to affected areas.
3.    Apply moisturizer if desired.
4.    Repeat this process 1–2 times per day, as needed.
Tea tree oil has strong anti-bacterial and anti-inflammatory properties. Applying it to the skin has been shown to reduce acne.
# Green tea is very high in antioxidants, and drinking it can promote good health.
There aren't any studies exploring the benefits of drinking green tea when it comes to acne, but applying it directly to the skin has been shown to help.
This is likely because the flavonoids and tannins in green tea are known to help fight bacteria and reduce inflammation, which are two main causes of acne .
The major antioxidant in green tea — epigallocatechin-3-gallate (EGCG) — has been shown to reduce sebum production, fight inflammation and inhibit the growth of P. acnes in individuals with acne-prone skin .
Multiple studies have shown that applying a 2–3% green tea extract to the skin significantly reduces sebum production and pimples in those with acne .
You can buy creams and lotions that contain green tea, but it is just as easy to make your own mixture at home.
1.    Steep green tea in boiling water for 3–4 minutes.
2.    Allow tea to cool.
3.    Using a cotton ball, apply tea to skin or pour into a spray bottle to spritz on.
4.    Allow to dry, then rinse with water and pat dry.
You can also add the remaining tea leaves to honey and make a mask.
Even though there isn't any evidence that drinking green tea can fight acne, some research suggests it may still be beneficial.
For example, drinking green tea has been shown to lower blood sugar and insulin levels, which are factors that can contribute to the development of acne .
Green tea is high in antioxidants that help fight bacteria and reduce inflammation. Applying green tea to the skin has been shown to significantly reduce acne.

Labels: Some remedies for removing acne