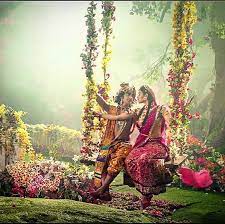 Bal Ganesh questions gods if there is any weapon more powerful than Mahadev’s trishul as he wants to play with it. Devraj Indra says there is no weapon more powerful than trishul. Devi Gauri invites them for feast. Ganesh says he is eager to have modak. Devi Gauri says let the special guest come and thinks naughty Krishna makes everyone wait. Radha goes to call Krishna for lunch. Krishna says he is invited for a feast. Balram walks in and asks why he and Radha are not invited. Krishna says that is because Radha doesn’t eat anything and Balram will finish whole food. Balram says he is right and asks where is he going. Krishna says feast is for a small kid whose company he will enjoy soon and asks Radha to pack kheer for him. She goes to kitchen. Krishna thinks he needs to take sweets for his bhanja/nephew.

Nandi and Ganpret visit Mahadev and request to let them enjoy the feast with Ganesh as Krishna is also invited and he will bring a special dish for sure. Mahadev asks who will work here if they enjoy the feast and rest. Nandini says even he will have feast and rest. Mahadev says he will not attend the feast as Ganesh will seek his trishul again and Gauri will be disappointed if he doesn’t give trishul to Ganesh. They agree and walk away. Mahadev thinks Krishna tricked him and now he will trick Krishna.

Nandi with Ganpret visit feast venue and inform everyone that Mahadev will not attend the feast as he is busy. Ganesh says its better he doesn’t come as he doesn’t give his trishul to him. Krishna enters asking him not to say that. Ganesh asks if he is Krishna who is making them wait since long. Devi Gauri asks him to behave with the god of gods. Krishna says its okay as a nephew has a right to confront his uncle. Ganesh asks if he is his uncle, where is his gift. Krishna says he brought sweets for him, Radha’s prepared kheer, and offers it. Nandi, Ganpret, and gods get happy hearing that. Ganesh checks kheer pot and asks how will he serve such a less kheer to everyone. Krishna asks to keep having it as its Radha’s prepared kheer made with love. Devi Gauri asks everyone to sit while she serves modak and kheer. Nandi says he is eager to have Devi Parvati’s prepared modak and Devi Radha’s kheer. Krishna tells Ganesh let us have food together. Ganesh agrees and sits holding his hand. Mahadev is surprised seeing that.

Krishna asks Devi Gauri to serve feast to her son first. Ganesh asks to serve others first and he cannot be satisfied until his mother feeds him first. Devi Gauri gets emotional and serves him modak. Krishna asks him to finish them all at once. Ganesh says he wants to enjoy food and cannot have so much. Krishna says he is very powerful and can have whole universe in bite and drink whole ocean at once. Ganesh finishes all modaks. Gods, Nandi, and Ganpret they are satisfied seeing Ganesh having modaks and and excuse themselves. Nandi and Ganpret return to Mahadev. Mahadev asks if they finished a feast. They nod yes. He asks if Ganesh didn’t trouble his uncle. They say no. He says he himself will go there and check. Krishna reminds Ganesh finishes whole food. Krishna praises him and says he will leave now. Ganesh says he felt good meeting him and asks to visit him again. Krishna disappears. Mahadev enters and is shocked seeing Ganesh finishing whole food. Ganesh says Krishna reminded him his superpowers. 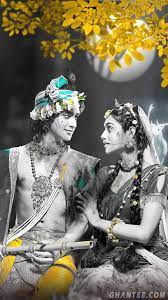 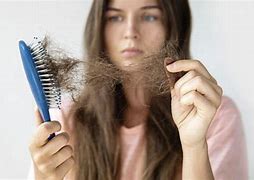