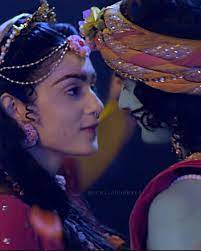 As soon as Rukmini keeps her  bangles Krishna’s side lifts up but Sam says that she hasn’t won’t as it is not fully up and then Radha comes and gives Rukmini something and asks her to keep it on the other side everyone is shocked to see that Krishna’s side comes to a level and when everyone saw what Rukmini kept it was a Tulsi Leaf.

Then Radha announces Rukmini as the winner and other wives of Lord Krishna congratulate her and went away. As usual Sam failed with his plan so he went away angrily. As he goes away and comes out of Dwarka the soldiers of the king came and asked him for the gold which is equal to the weight of Krishna.

Sam gave them the bangles and Tulsi leaf and said that Krishna has only this much weight the soldier became angry and said that Sam tried to fool his king.

Sam became angry and kept a sword on his neck and asked him to leave.

Meanwhile Radha entered Krishna’s place and asked him whether there is any problem as he said in front of Narad Muni.

Krishna said that the problem will also go away soon. 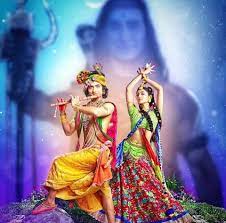 Radha says that this Yagna should be done without any problem.

Sam tries to make a new plan and knots the horse and says that if the horse will not reach Dwarka then how will the Yagna take place.

Krishna laughs and suddenly the horse jumped and opened the knots and ran towards Dwarka. Sam gets angry again and starts running behind the horse to stop him from entering Dwarka.

Meanwhile Radha asks Krishna to begin with the Yagna but Krishna says that he will do the Yagna After going to the Shiv temple Naked feet on hearing this Rukmini asks him if she could also follow him and go bare foot but Krishna denies and says that it is not mandatory to do whatever he does.

Then they start their journey to the Shiv Temple and in the way Balram asks Radha the reason behind her not walking with Krishna and staying so away.

She said it is true that He is mine but other’s also have some right over him and today is the biggest day for Rukmini as she has been selected. Balram asks about Radha can do this every lover in this world asks for the attention of his/her lover and you are the one who lets him go.

Radha smiles. Meanwhile Rukmini too says Krishna that she is not feeling good as Krishna is walking with her only and not with his other wives to which Krishna replies that he is of everyone.

Suddenly Krishna stops and shouted everyone looked at him.

Krishna took his feet up and there were so many thrones on his feet everyone was shocked to see.

He sat on a rock and Rukmini asks him that she wants to remove those thrones Krishna denies but after she insists he agrees everyone removed one throne .As they were removing each throne Radha was coughing severely as if she was feeling the same pain.

At last only one throne was left Styabhama asked Radha to remove it but Radha denied and asked Rukmini to do it. 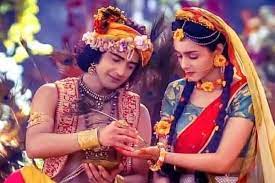 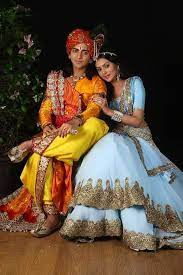