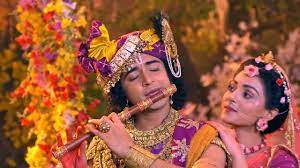 Mahadev provokes Ganesh saying his Krishna mama is Narayan who has the most powerful weapon Sudarshan Chakra which returns after killing the enemy. Ganesh gets mesmerized and says he will go to Dwarka then and play with Sudarshan Chakra. Mahadev says he needs to return his trishul for that.
Krishna hearing that thinks Mahadev played a trick but sister, Gauri will not let Ganesh go. Gauri says she cannot let Ganesh use Sudarshan Chakra and send Ganesh far away alone.
Mahadev says Devi Radha is present there who ill love Ganesh like a mother and will serve him Modak. Gauri agrees. Ganesh gets excited and says he will learn bansuri also and play it for mata Gauri. Mahadev says Ganesh that his mamaji is maltitalented and he should learn all the skills from him. Ganesh agrees. Mahadev tells Krishna that he failed in his plan. Krishna asks to watch his reply.

Balram distributes Ganesh's Prasad modak among Dwarka Citizens. Krishna informs him that he is going to rest and wants him to protect sudarsan Chakra in his absence. Balram agrees. Krishna asks Mahadev how is his counter plan. Radha prepares modak for Ganesh unknowing abot his visit. Balram seeing that tempts for modaks. Ganesh enters Dwarka. Radha feels his arrival and says someting good will happen. Krishna taking Narayan's formand resting in Khsirsagar thinks Radha's motherhood is awake and she will take care of Ganesh. He then thinks of resting before his sleep gets disturbed. Balram protect his Sudarshan chakra. 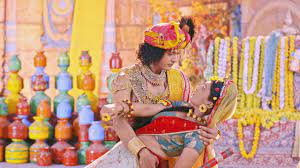 Radha gets happy seeing BAl Ganesh and greets him.He says she is a motheer and should bless him instead. She gets emotional and asks if he called her a mother. He says yes and asks her to hug like a mother. She hgs him emotionally. Devi Gauri watching it tells Mahadev that Radha is taking care of Ganesh like a mother and she need not to worry now.
Balram introduces himself to Ganesh. Sam thunks Ganesh helps everyone, so he shold take his help, he asks BAlram to introduce him. Balram says he is GAnesh's mama shri's son Yvraj Sam. GAnesh asks where is Mama Shri. Balram says he has gone for some work. Ganesh says he called him here bit is missing. Radha aska if he is hungry she prepared modak. He says modak is his favourite, how did she know he is coming. She says he called hr mother, so she sensed it.
Radha serves modak to Ganesh, Ganesh insists to meet Krishna.
Balram says his Mama Shree is resting in exile. Ganesh insists more and disappears. Mahadev thinks he will send Ganesh to Narayan.